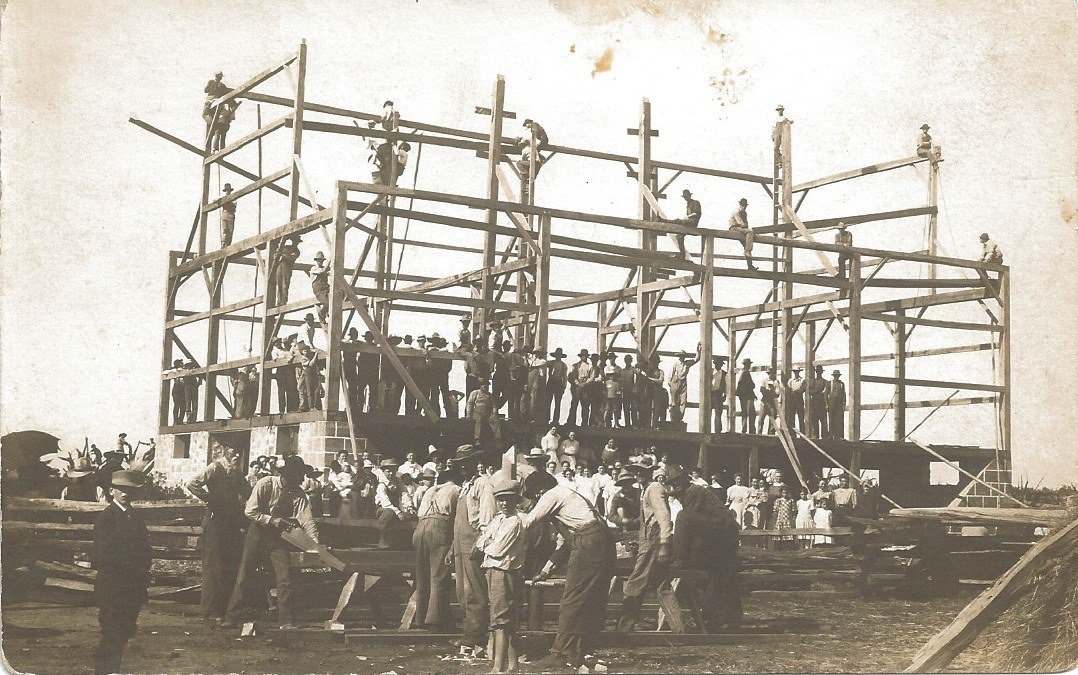 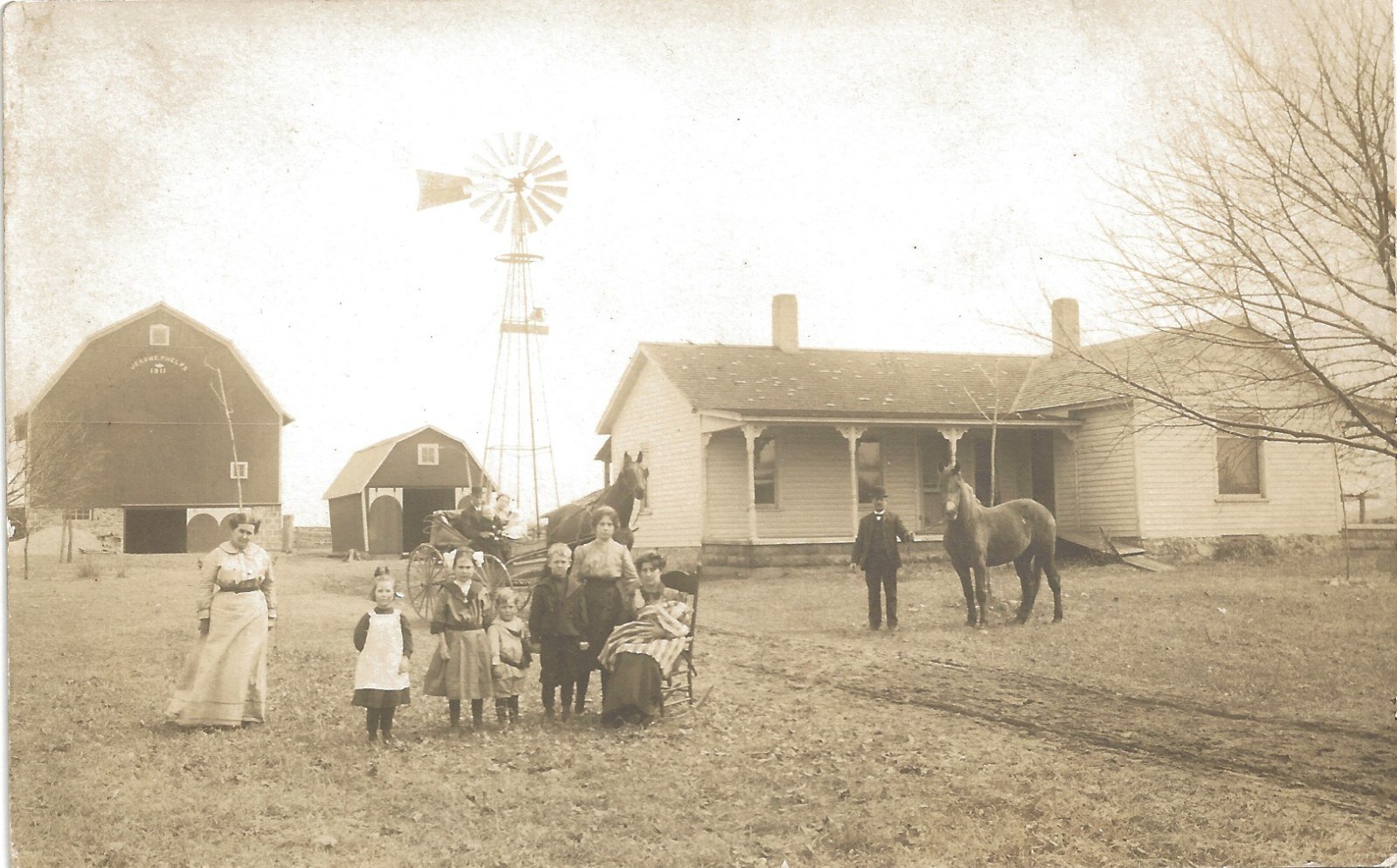 The Phelps Family traces its roots in Courtland Township back to 1885 when Aaron’s great-great-grandparents – Edgar and Catherine Phelps – purchased property on Ritchie Avenue.

The current farm was originally old growth forest and the site of a saw mill operated by Edgar, who was a prominent figure in the Cedar Springs area.  At one time Edgar employed over 40 men in the lumber business and also served as township supervisor and on the local school board.

The original homestead was cleared with horses, and even today you can find remnants of old pine stumps that were used to create fence rows.  The sawmill burned in 1910, and it was replaced with the hip-roofed, bank barn that stands today. The barn was constructed with massive beech wood beams, anchored to a two foot thick concrete/stone foundation, and topped with wooden shingles.

Edgar and Catherine had eight children, including a son Clarence Jerome who, with his wife Addie, took over the property, which had been converted to farming.

This picture, of the Clarence Jerome and Addie Phelps family, dates back to around 1914. The house was built in the 1880’s (one half was a bunk house for lumberjacks that was towed to the main house and attached), and the barn in 1911.

Aaron’s Grandpa – Jerome Phelps – was the youngest of five (three girls and two boys) and was born (literally) and raised on the farm. Jerome never really left the farm; his Dad died in 1932 and Jerome took over the farm with his wife Margaret and raised five kids of their own. Jerome farmed with horses and raised various row crops, hogs and cattle. The family raised milking shorthorn cattle from the early 1940’s until they quit the dairy business in the 1950’s. The shorthorns stayed around though, and formed the base of a new beef operation when crossed with a Hereford bull. Over the years, the Hereford genetics became dominant and the beef operation continued until the early 1980’s. 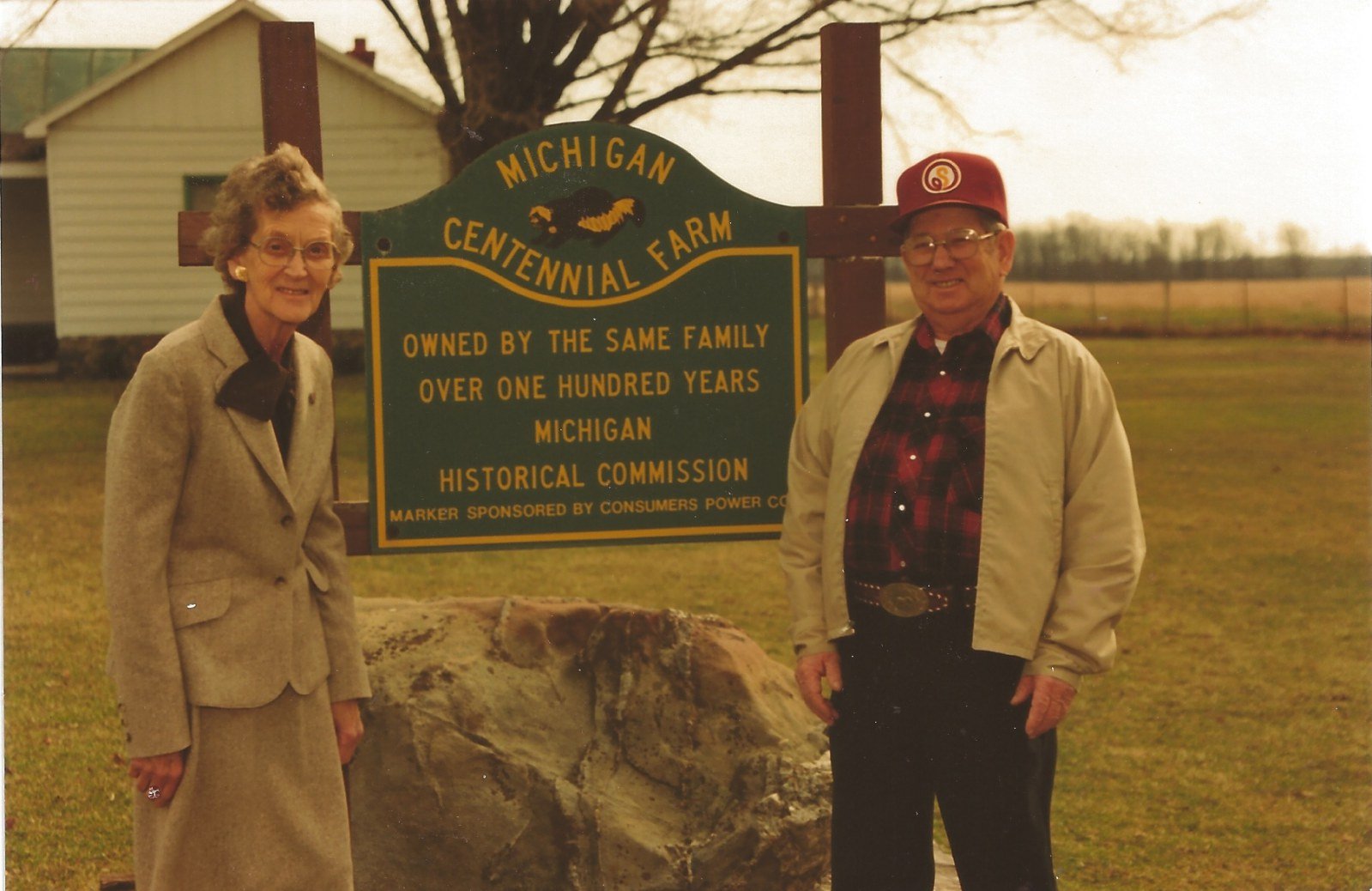 Aaron spent many summers and weekends on the farm, though the cattle operation was gone by the time he was old enough to remember.

Later Aaron lived on the farm while attending college, and for a short time after getting married, Aaron and Elizabeth called the farm home. In fact, Aaron proposed to Elizabeth on the south porch one summer night in 2002.

Aaron and Elizabeth later bought their own farm two miles away. After finishing their house in 2005, the first Angus cattle arrived in 2006. Three registered cows from South Greene Angus in Waynesville, Ohio. Aaron lived next door to South Greene farm when he was in high school, which is where his interest in Angus cattle all started. Over the years, various improvements have been made and most recently we completed construction of a 60 by 120 livestock barn, which has made winter calving much easier. 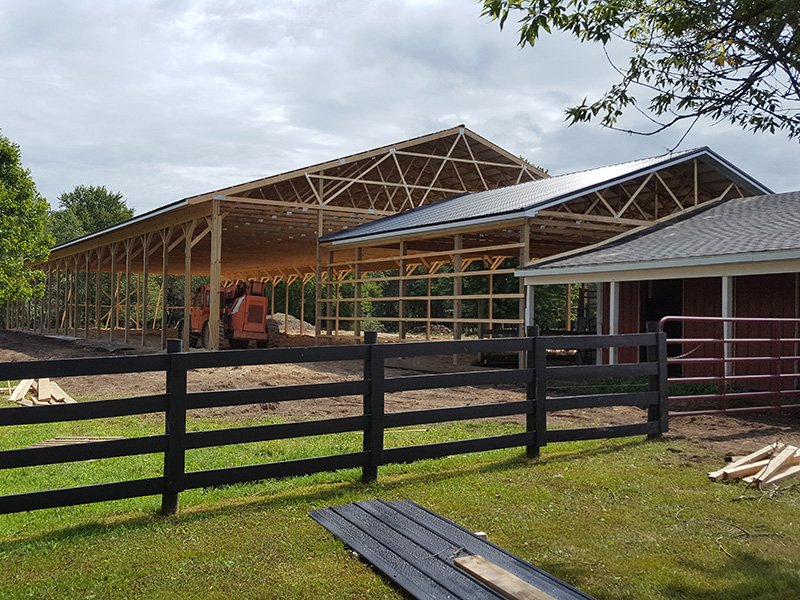 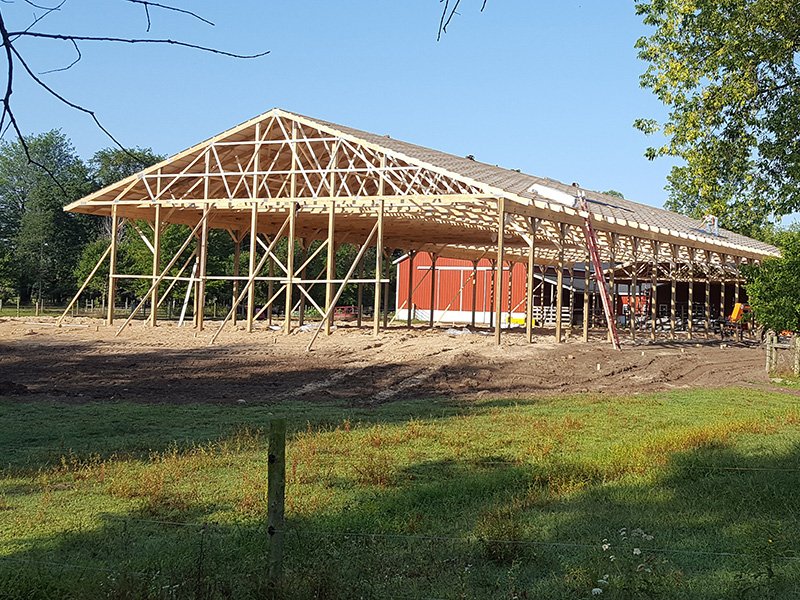 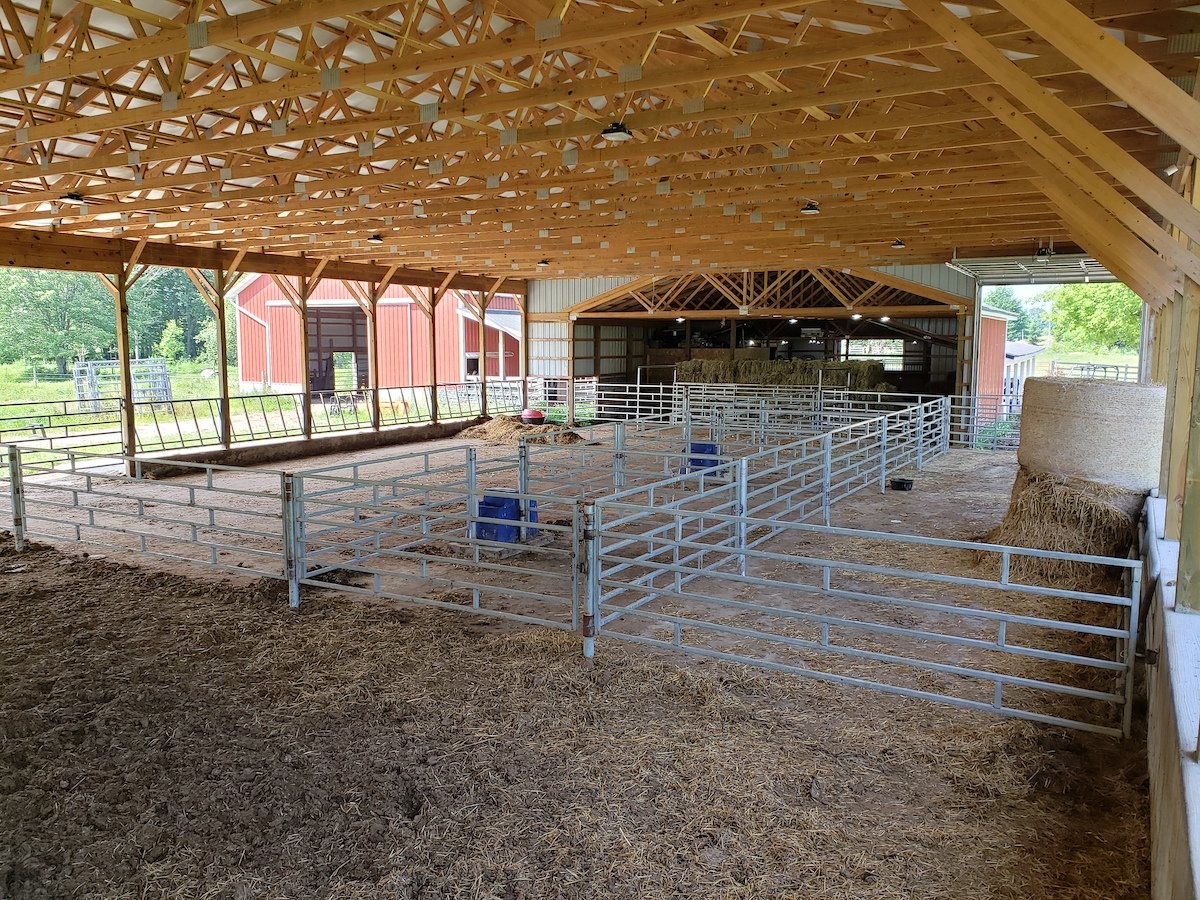 Life comes full circle and in 2018 Aaron and Elizabeth bought the family centennial farm. It suffered from serious neglect, so the first order of business was preserving the historic barn. Although structurally sound, it was infested with powder post beetles, had some leaks in the roof, and the 100 year old pine siding was a little worn. A few months later – wow – we are good for another 100 years! 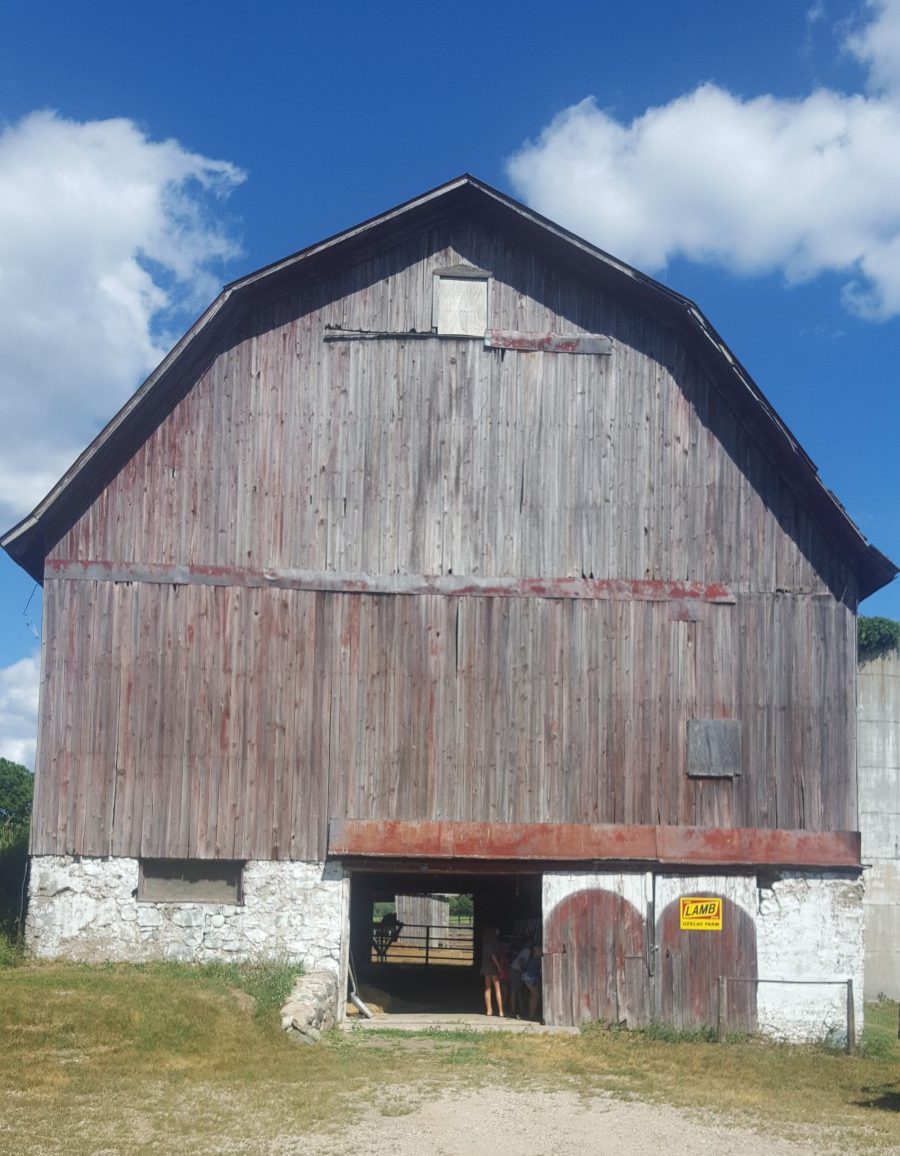 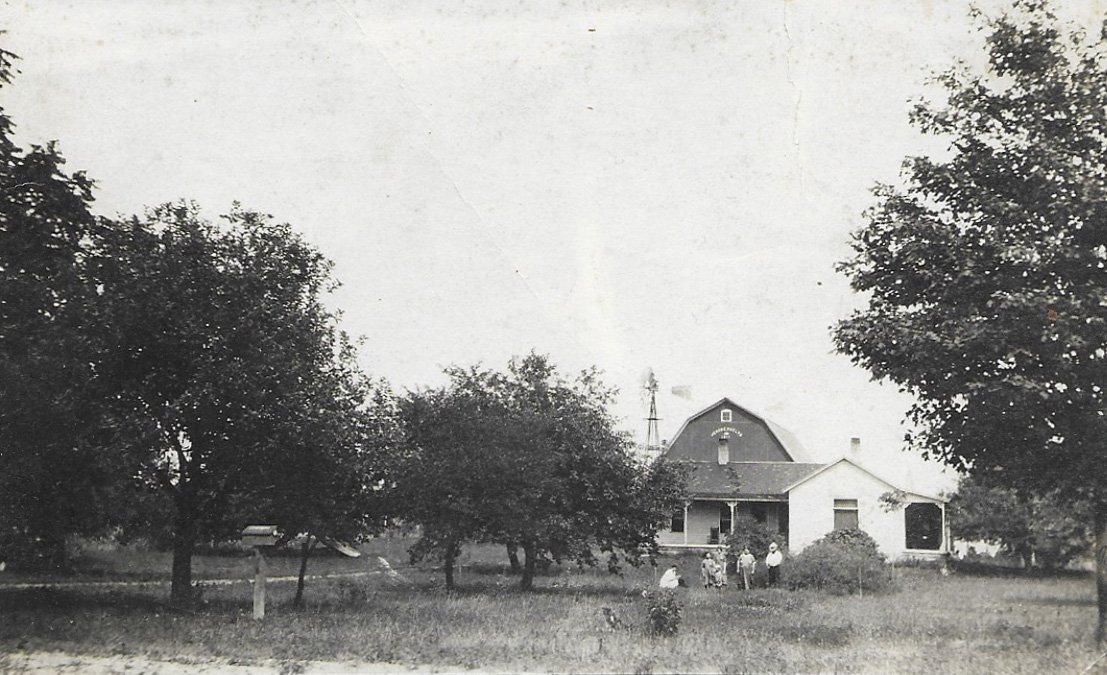 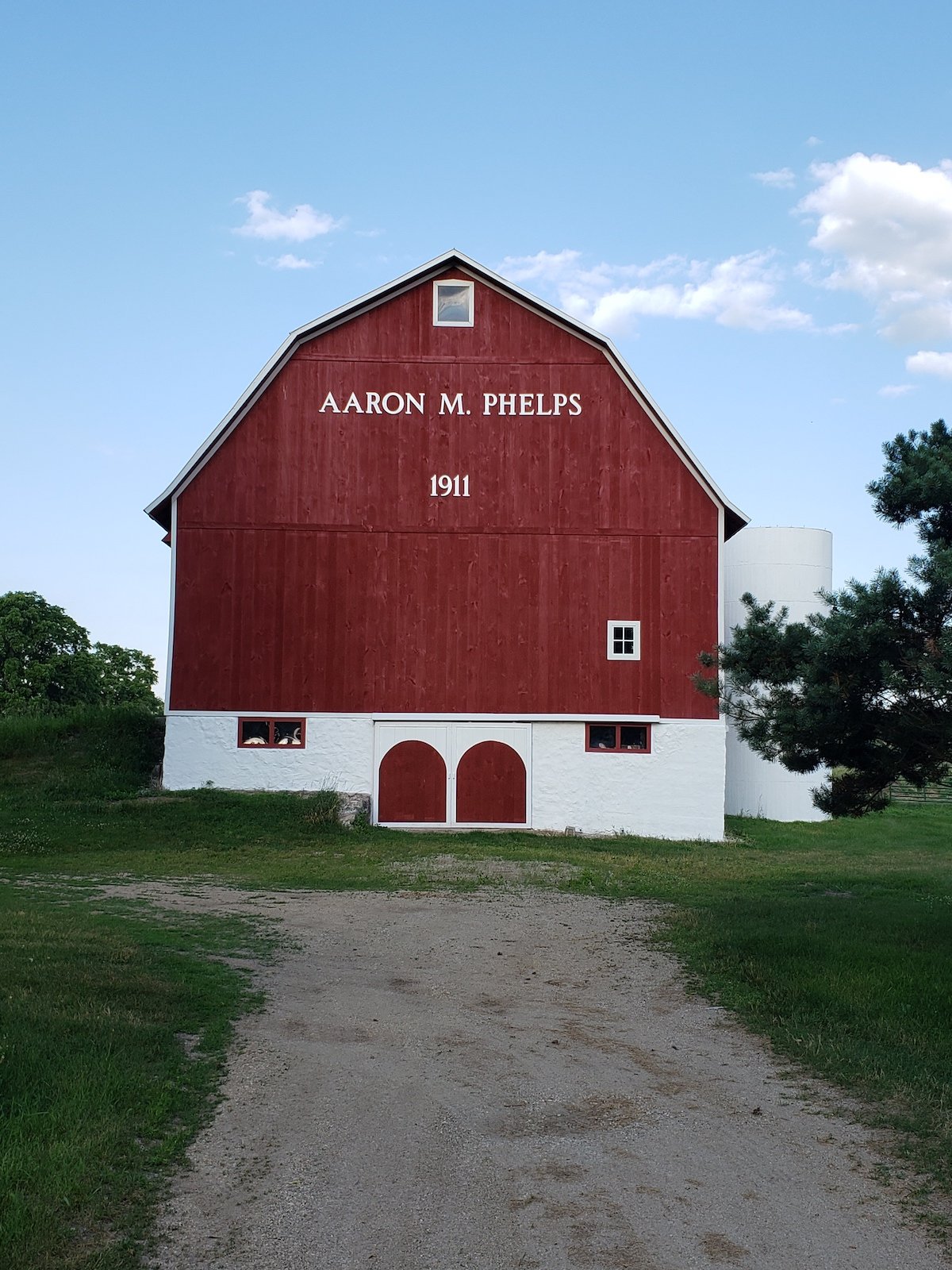 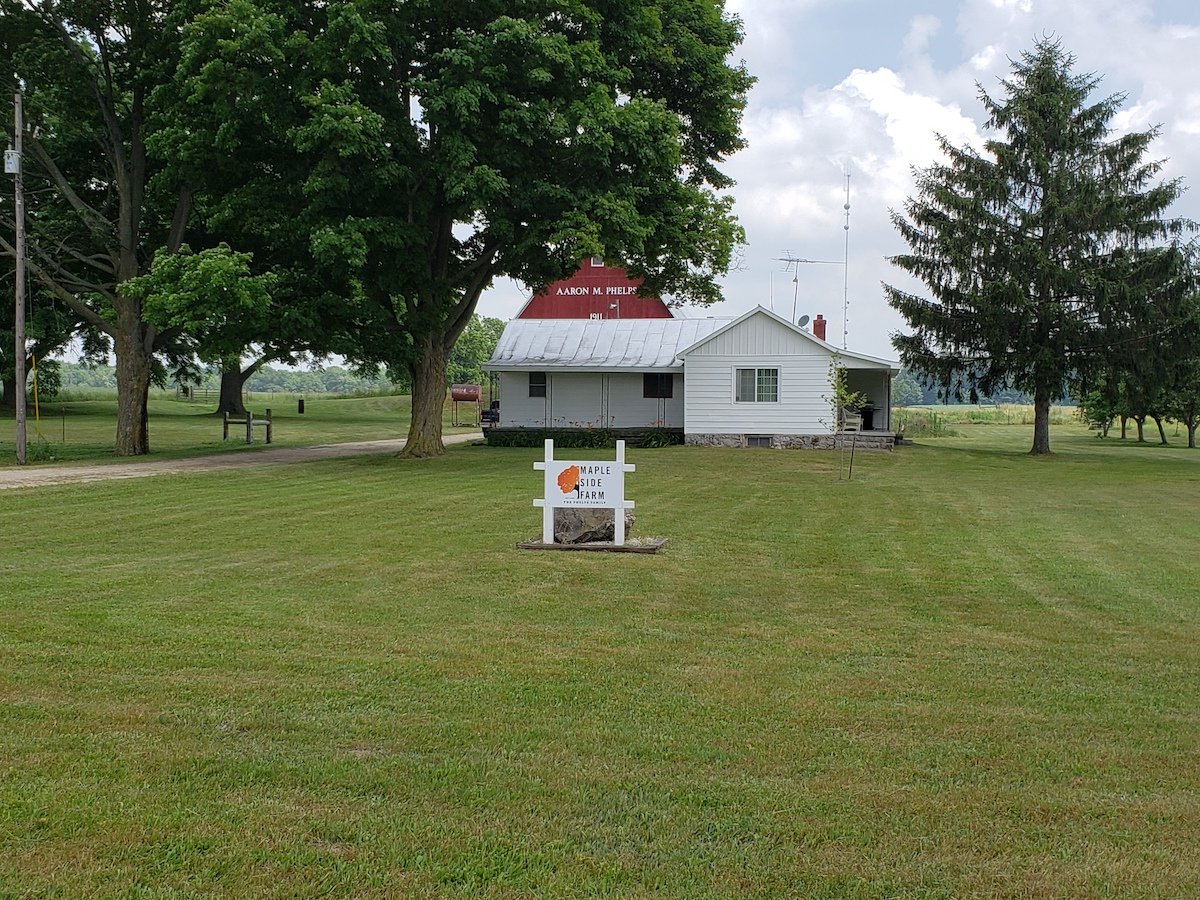 It’s not all about cattle, though.
Visitors are always welcome. If you are in the neighborhood, stop by.